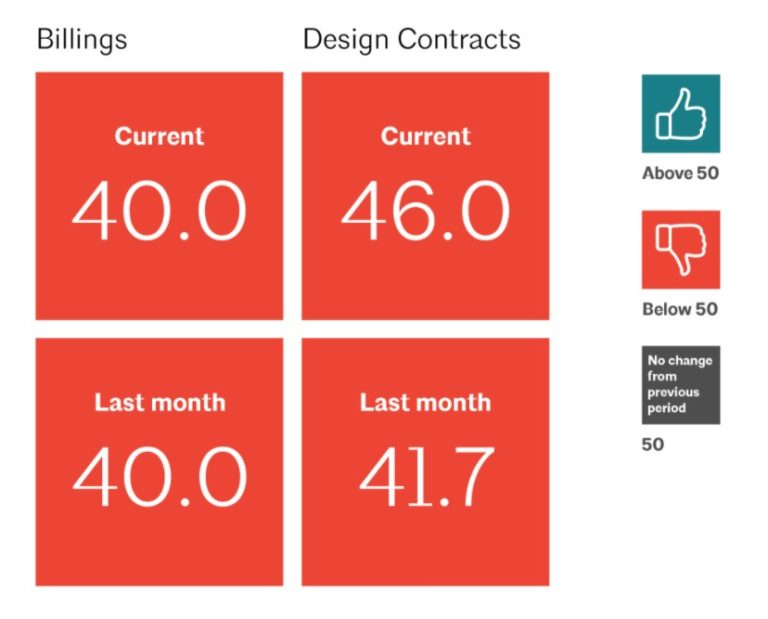 Business conditions remained stalled at architecture firms in August, with the Architecture Billings Index (ABI) recording a score of 40 for the third consecutive month (a score below 50 indicates declining firm billings). While fewer firms reported declining billings in August than during the early months of the COVID-19 pandemic, the fact that the score has been unchanged for the last three months means that the share of firms reporting increasing billings has not risen during that time. However, there is some reason to be optimistic when it comes to work in the pipeline: inquiries into new projects grew in August for the first time since February, and the value of new design contracts increased to a score of 46.0, indicating that fewer firms reported a decline this month, despite the fact that they remained negative overall.

Business conditions remained extremely soft at firms located in the Northeast in August, where firms had not only been experiencing a lengthy period of weakness prior to the pandemic, but were also located in the region that was hardest hit by the pandemic and subsequent recession. Billings continued to decline at firms in the rest of the country as well, but the pace of that decline has slowed from the low point in the spring. On the other hand, firms with a multifamily residential specialization continued to report stabilizing conditions, and almost saw overall billings growth in August for the first time in seven months. However, conditions remained very weak at firms with a commercial/industrial specialization, and have stabilized modestly at firms with an institutional specialization.

Commercial construction activity remains down
In the broader economy, nonfarm payrolls added 1.4 million new positions in August, rising at a slightly slower pace of growth than in recent months, and remain 7.6% below the February pre-pandemic employment level. Also in August, 24% of employed persons reported that they teleworked that month specifically due to the impact of the pandemic. The most current data available on architectural services employment is from July, and unfortunately it shows that the industry shed an additional 6,000 positions from June to July, declining to total employment of 183,100, the lowest level in nearly four years. In total, the industry has lost 16,900 jobs since the beginning of the pandemic (employment is 8.5% below the pre-pandemic peak in February), with the greatest losses occurring in April and July.

The latest edition of the Federal Reserve’s Beige Book report, released on September 2, shows that most regions of the country saw economic activity increase modestly in the previous six-week period, albeit at a rate well below the pre-pandemic level. In particular, commercial construction activity remains down in most districts, and commercial real estate sales have generally continued to shrink. While commercial real estate activity worsened in the Kansas City district during this period, it saw modest gains in the San Francisco district. Residential construction and real estate, on the other hand, was generally strong across the country, with strong home sales reported in the Boston, Richmond, Kansas City, and Dallas districts, and strengthening residential construction activity noted in the San Francisco district.

Pandemic impacts conversion of proposals to active projects
This month’s special practice questions asked responding firms about the impact of the COVID-19 pandemic on the conversion of design proposals for clients to active projects. Overall, firms reported that since the beginning of the pandemic about one third of the design proposals their firm has prepared for new clients (33.6%), and more than half of those prepared for repeat clients (54.8%), have been converted to active projects. Firms located in the West tended to report the highest conversion rate for both new and repeat clients, while small firms tended to report the lowest conversion rates. 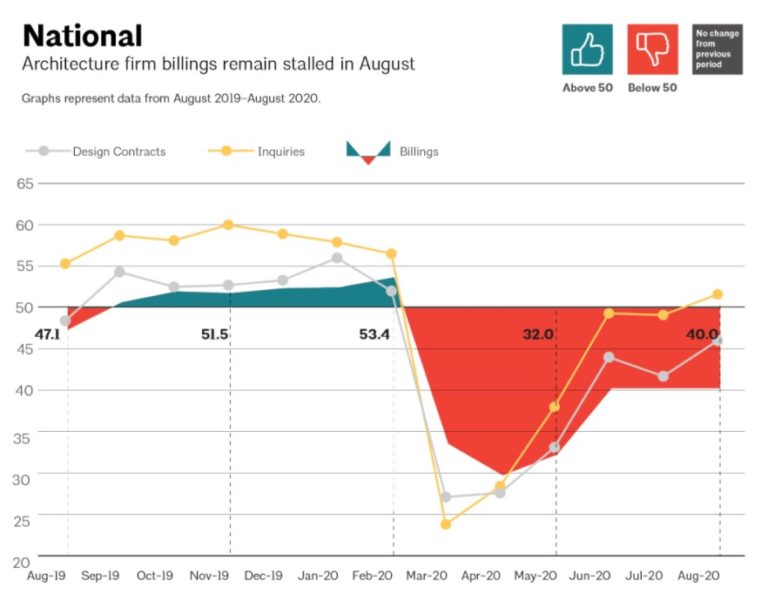 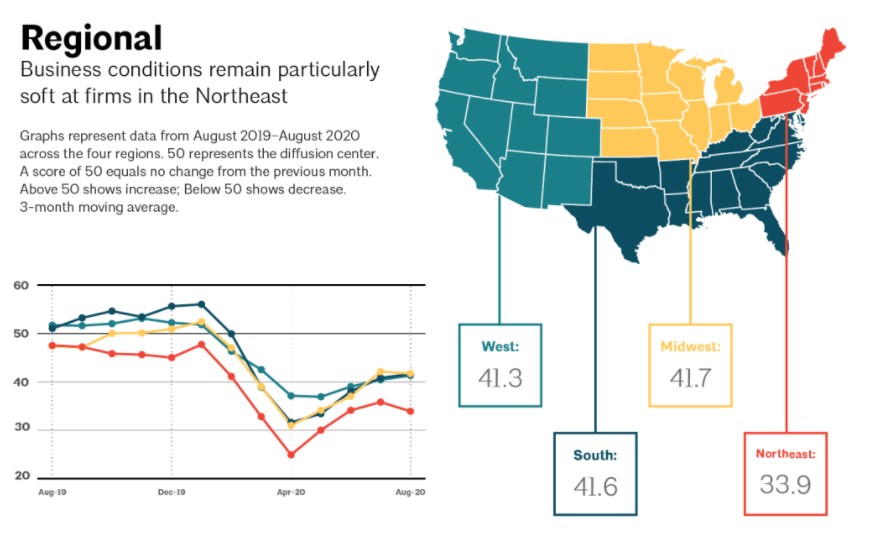 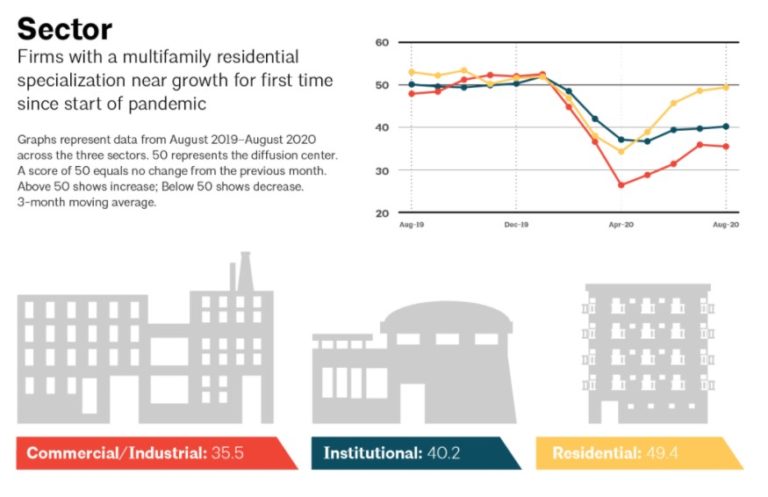 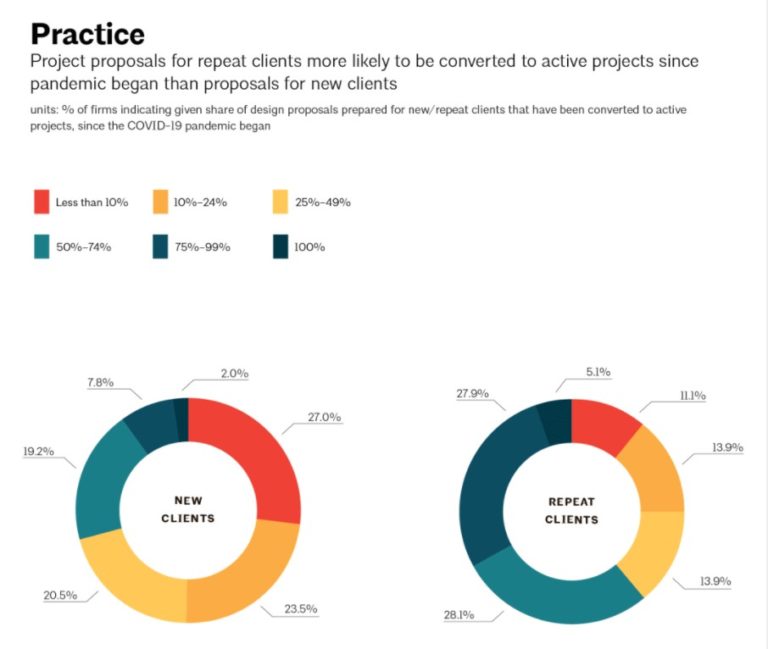