By Kerwin Lee and Erick Mikiten

This article follows up on a subject from last month’s code article on the subject of accessible showers. As we move into the 2019 Edition of the California Codes, including the California Building Code (CBC), which becomes effective on January 1, 2020, there are some changes that should be noted. One of these is the requirements for an accessible shower. 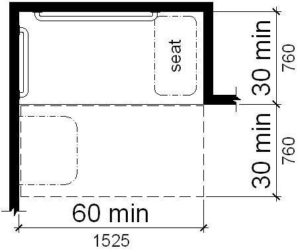 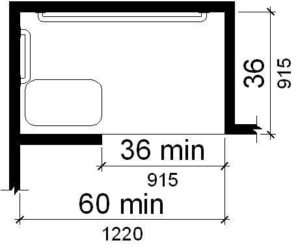 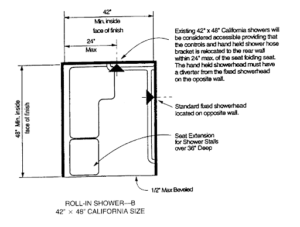 The Fed’s stated that the bigger shower made it more difficult for users to access and reach the controls. This was never directly stated or acted upon by the Feds except when the State submitted their code for certification as to complying with the ADA back in 2002, this was one of the comments, along with over a thousand other comments, as to why the CBC could not be certified as complying with the ADA.

What has been added to the 2019 CBC, under Chapter 11B, Section 224.2 and Section 608.2.1 is the ADA’s “Transfer Shower”, a 36 x 36 inch configuration is shown to the right. This will now align with the ADA as for shower configurations. Note in the graphic diagram the location/placement of the wheelchair relative to the shower layout for transfer from the wheelchair to the fold down seat. This is important for compliance. See Section 213.3.6 of the 2019 CBC for where this shower configuration can be used.

Although this is a not a significant change, it is an important one to know and understand. Using this configuration could save space and be used in retrofitting existing buildings where a full roll-in shower would not fit. Now you have three shower configurations that can be used for compliance with Chapter 11B of the CBC: Standard Roll-in, Alternative Roll-in and the Transfer Shower. 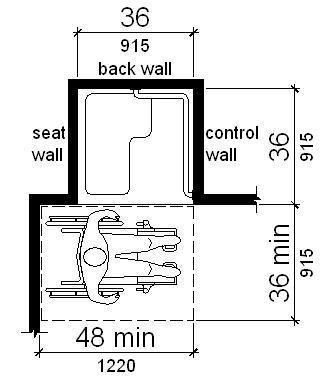 If you haven’t already started using the 2019 edition of the code for your project(s), you should. Any project that is submitted for permit approval on January 1, 2020 will be reviewed under this new code.

There are many wheelchair users (myself included) who are looking forward to these more compact showers for exactly the reason that it’s easy to reach from the seat to the controls and hand-held shower unit. I’ve stayed in too many hotels with a shower seat at one end of the five-foot-long roll-in shower, and the controls at the other end. That configuration doesn’t even meet code, but I’ve encountered it nonetheless.

Which brings up the scoping of this change – they’re allowed only in transient lodging guest rooms, multi-bedroom housing units in undergraduate student housing and residential dwelling units. Table 11B-224.2 has been updated to show the number of this option you can include; it’s NOT an option that can simply replace the regular 30 x 60 or 36 x 60 showers we’re all used to. But I recommend using them when you can. Especially for transient lodging, where people won’t be traveling with a dedicated shower wheelchair that can get wet, they can transfer from a wheelchair to this compact shower and be able to keep their regular wheelchair outside and dry, yet within easy reach.

In all other shower configurations, you can never allow the grab bar to overlap the seat, but in the small 36 x 36 shower it was recognized that since an 18-inch grab bar is required, some overlap is unavoidable.

A final new exception for these showers only, is that a 2-inch-high threshold is allowed, but only in existing where the otherwise-required ½” high threshold “would disturb the structural reinforcement of the floor slab”. The rationale is that the shower is so small that most people will park their wheelchair outside the shower and transfer onto the seat. Maneuvering the wheelchair partly into the shower can make for a better transfer angle, but it’s not as critical as it is for a larger shower.

Change is on the horizon for accessibility requirements. The ADA and the CBC (California Building Code) are both based on 1970’s studies that determined things…

As we head into 2021, there are a number of code changes that have been approved and published (official publication date, January 1, 2021) and…