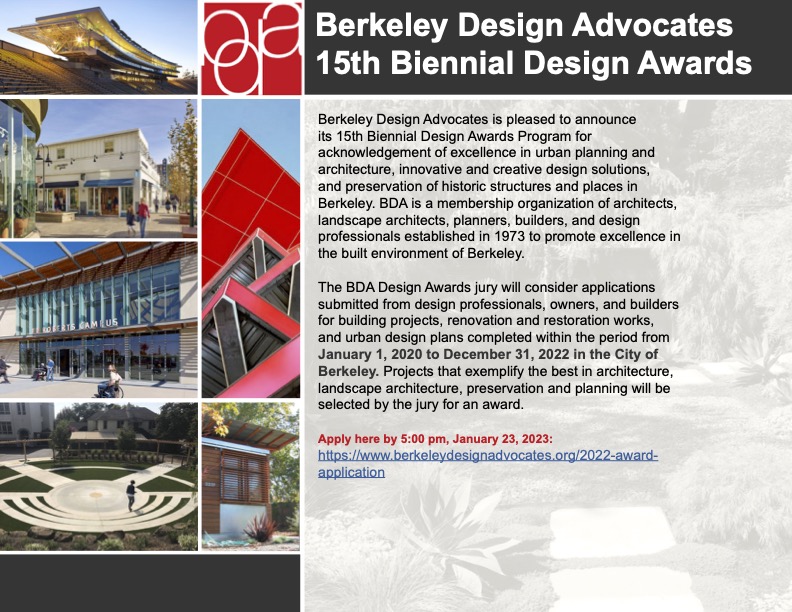 Berkeley Design Advocates is pleased to announce its 15th Biennial Design Awards Program for acknowledgement of excellence in urban planning and architecture, innovative and creative design solutions, and preservation of historic structures and places in Berkeley. BDA is a membership organization of architects, landscape architects, planners, builders, and design professionals established in 1973 to promote excellence in the built environment of Berkeley.

The BDA Design Awards jury will consider applications submitted from design professionals, owners, and builders for building projects, renovation and restoration works, and urban design plans completed within the period from January 1, 2020 to December 31, 2022 in the City of Berkeley. Projects that exemplify the best in architecture, landscape architecture, preservation and planning will be selected by the jury for an award.

To be considered for an award, the following items must be received no later than 5:00pm, January 23, 2023:

Award recipients will be notified of the jury’s decision by February 23, 2023.  The Awards ceremony will be held March 24, 2023, early evening, at the Aurora Theater in Berkeley.

John King: Urban Design Critic SF Chronicle. A two-time Pulitzer Prize finalist and author of two books on San Francisco architecture, King joined The Chronicle in 1992 and covered City Hall before creating his current post. He is an honorary member of the American Society of Landscape Architects.

Anne M. Torney: Architect and Partner at Mithun. An active advocate for mixed-income, transit-oriented development. Anne serves on Mithun’s Board of Directors and leads the firm’s San Francisco office. Graduate of UC Berkeley and Princeton University.