By Marisa Kendall on MercuryNews

OAKLAND — Ernesto Sandoval was on a BART train, crying and desperate, with nowhere to go, when his phone rang with an offer that seemed too good to be true: His own tiny home in a community built by and for young people like him.

Sandoval, who had been homeless since his father kicked him out at 18, moved into the Tiny House Empowerment Villagein Oakland earlier this year. The 22-year-old went from sleeping in a tent and scavenging food from garbage cans to planning for college.

“This is more than a blessing,” he said. “This is a literal miracle. This is something that never happens to me. I’ve always had a bad life.”

On Friday, Sandoval welcomed dozens of people, including faith leaders and elected officials, to the grand opening of his tiny home village.

The mood was festive as a band played and guests chatted, snacked and milled about the 26 wheeled houses, which will shelter unhoused people age 18 to 25 for up to two years — after which they will be placed in permanent housing. The tiny homes, run by local jobs training nonprofit Youth Spirit Artworks, sit on a city-owned lot off Hegenberger Road, near the Coliseum.

Oakland has never seen anything quite like it before. Unsanctioned tiny home villages have popped up throughout the city, and Oakland has set up multiple “cabin communities” that house people in tiny structures. But the Empowerment Village is different because it was designed and built by the community. Youth Spirit Artworks led the entire process, engaging hundreds of young people — including residents — to build and decorate the tiny homes. Youth Spirit Artworks has received calls from people around the country hoping to replicate the Empowerment Village, and the nonprofit already is in talks to build another tiny home community for homeless university students.

But it took a long time to reach Friday’s celebration. Youth Spirit Artworks has been working on the tiny home project for years, building the first prototype in 2017.

Meanwhile, unhoused young people are in desperate need of services. There were more than 700 unhoused people age 18 to 24 in Alameda County in 2019, according to the county’s most recent count. But the county has fewer than 36 beds designed for young people, according to Youth Spirit Artworks.

The Empowerment Village looks like a place young people would hang out. Everything in it — from the houses to the planter boxes to the fence surrounding the property — is covered with murals painted in bright, psychedelic colors by local young artists.

On the inside, each tiny home looks a bit like a college dorm room, with a single bed, a funky quilt and a smattering of donated decorations. “Common yurts” function as gathering spaces, and are furnished with comfy couches, a kitchen, washing machines and even a piano. Occupants share communal bathrooms and showers.

The project cost $1.3 million. Oakland contributed $360,000 toward the program’s operation. 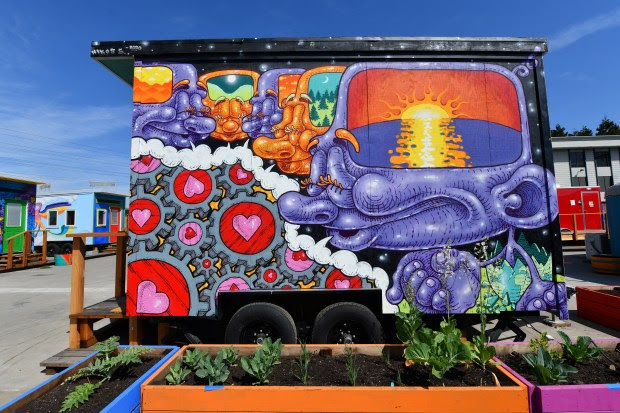 Residents will have case managers to help them find permanent housing, and they will be required to participate in weekly community meetings, perform three hours of chores per week, engage in “self-care” (running, yoga, etc.) for an hour per week and cook dinner with their neighbors once a week. Residents who get into trouble likely will be given the chance to make amends by working in the community, instead of getting kicked out.