Home › What recession? AIA Consensus Construction Forecast Panel optimistic about the construction outlook for this year and next 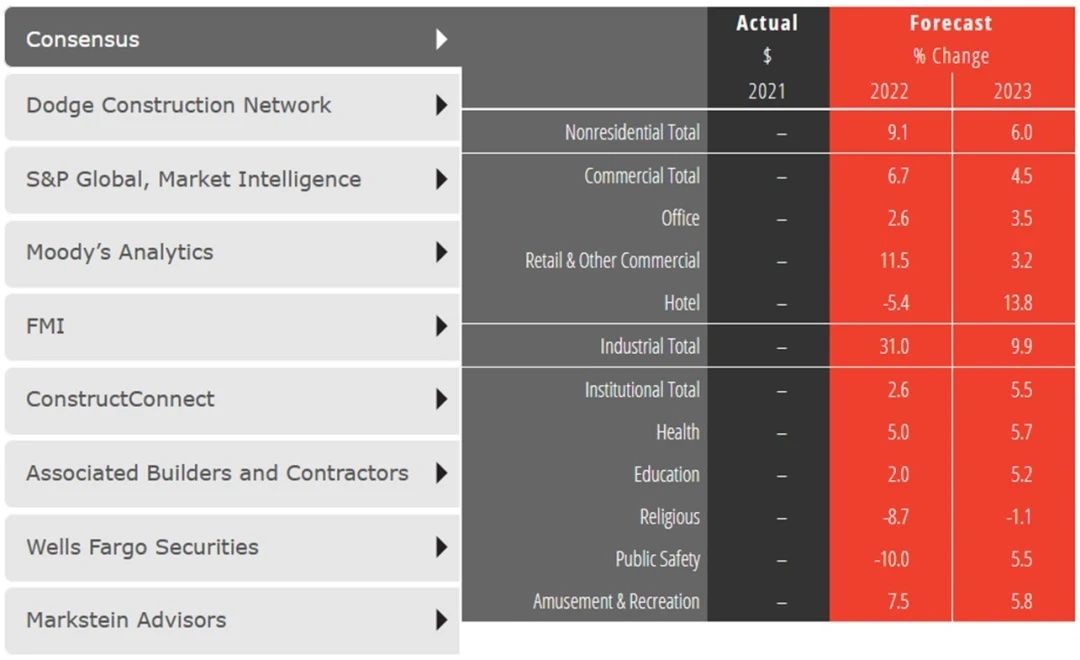 Construction spending on buildings is projected to increase just over 9% this year and another 6% in 2023 according to the mid-year update of the American Institute of Architect’s AIA Consensus Construction Forecast. This outlook is somewhat more optimistic than what was projected at the beginning of the year, largely due to the extremely strong gains in the manufacturing category, as well as surprising strength in retail facilities.

Both categories likely benefited from the gains in consumer spending on goods during the pandemic as spending on services faded. Additionally, supply chain problems that affected the economy over the past two years have encouraged manufacturers to reshore (i.e., supply domestically) a portion of their production while simultaneously increasing their storage capacity to better cope with potential future disruptions.  Warehousing and distribution facilities are classified in the manufacturing category if they are located at the manufacturing site, and otherwise in the retail and other commercial sector. The growth of e-commerce during the pandemic also dramatically increased the need for distribution facilities.

Somewhat surprisingly, as the prospects for construction spending have improved since the beginning of the year, the outlook for the broader economy has significantly deteriorated. A growing set of economic indicators have turned negative, and many economists feel that the prospects of an economy-wide recession have increased. Among the more worrisome indicators are:

The employment situation is notably at odds with the growing list of negative economic indicators. The economy has added over 20 million payroll positions since the lows of the pandemic, and the national unemployment rate is well below 4%. Businesses have many more positions to fill than there are candidates to fill them, leading to serious labor shortages in many industries.

Still, the national labor force is smaller than it was prior to the pandemic, and there is no shortage of theories offered for this scarcity of available workers. One is that the pandemic encouraged many older workers to retire earlier than might be expected. Another is that the time at home during the pandemic encouraged a “great resignation” where workers are leaving their current employment to look for better paying jobs, or opportunities that provide the option for remote work. However, the most plausible explanation is that workers have been responding to the unique circumstances of the pandemic where there were unusually high levels of illness coupled with child-care and other family-care responsibilities that prevented these caregivers from re-entering the labor force.

What’s the evidence of this? Despite a recent decline in the size of our labor force compared to pre-pandemic levels, the number of men in the labor force has increased by almost 600,000, while the number of women has declined by almost 700,000. This theory is reinforced by the age distribution of the labor force. The age category that saw the steepest labor force losses over the past two years is 18–34-year-olds, which suggests that child-care or other family-care responsibilities may have encouraged many women to leave the workforce.

The construction industry is not without its own set of challenges. Supply chain disruptions coupled with general inflation has pushed up inputs to construction by almost 15% over the past year. Most contractors are facing labor shortages which pushes out construction schedules, and rising interest rates are lowering commercial property values, thereby making new construction projects less profitable.

However, challenges to the economy and the construction industry notwithstanding, the outlook for the nonresidential building market appears promising for this year and next. Construction spending has picked up through the first half of the year, particularly for retail and manufacturing facilities. The AIA’s Architecture Billing Index (ABI) points to further growth in the coming quarters. The ABI has been positive every month since February 2021, and for over half of these months the ABI score was at least 55, considered to reflect very healthy growth in revenue at architecture firms.

Since the ABI has been shown to lead construction spending activity by 9-12 months, the building construction market is projected to see healthy gains this year and into 2023. The AIA Consensus Forecast Panel is projecting a 9.1% increase in spending for nonresidential buildings this year, and an additional 6.0% next year. The commercial construction market is projected to see mid-single-digit percentage gains both this year and next, spurred by strong growth in the retail and other commercial facilities. Modest gains in the office sector this year are expected to accelerate a bit in 2023, and the hard-hit hotel sector is finally projected to recover next year.

While the industrial market is expected to pace the building construction upturn this year and next, the institutional sector is forecast to begin its recovery this year and accelerate moving into 2023. Given the diverse collection of facilities in this category, the institutional recovery will be uneven. Construction spending in the healthcare sector never declined during the pandemic, and this strength is projected to continue with 5%-6% gains both this year and next.

The education market suffered from remote learning as there was less immediate need to renovate older facilities or build new ones. However, with most educational institutions back to in-person formats, modernization and added space needs will be more apparent, with growth projected at 2% this year and an additional 5% in 2023. Finally, there is significant pent-up demand for amusement and recreation facilities as these activities begin to return to normal and delayed projects come back on-line. The forecast panel is projecting upper-single digit percentage gains in spending for this category for both this year and next.

Firms report just a modest decline in overall head count due to the pandemic Business conditions at architecture firms continued their turnaround in March, with…