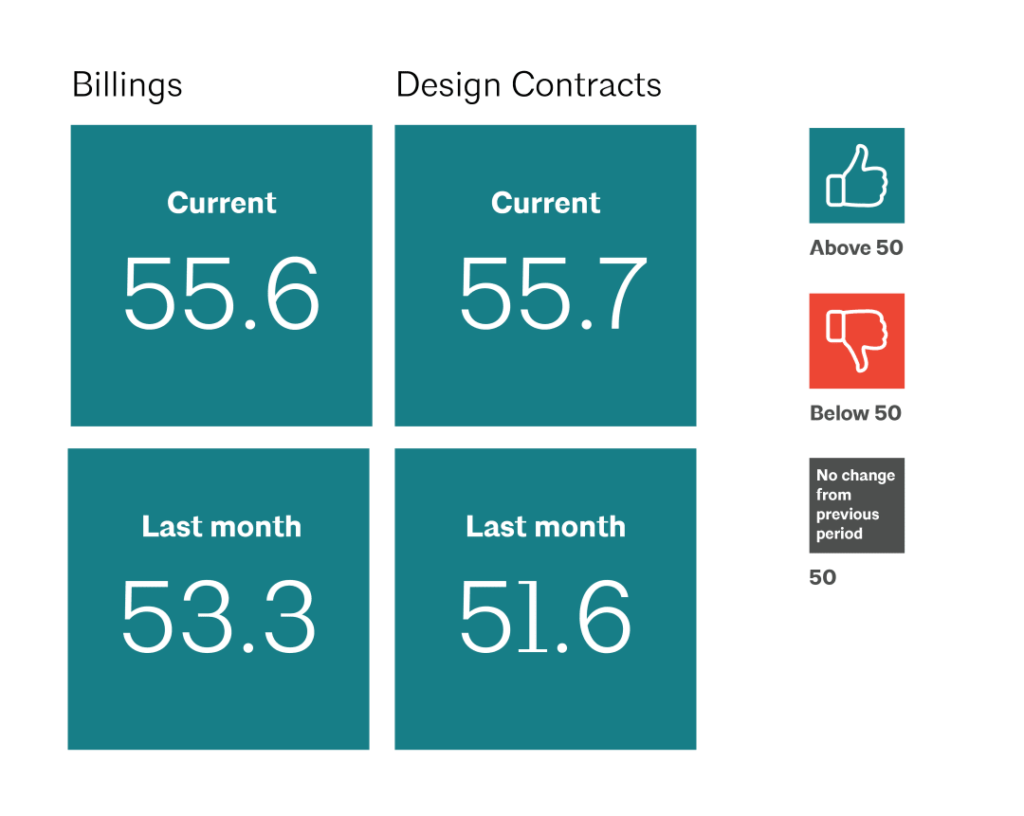 Business conditions at architecture firms continued their turnaround in March, with a strong ABI score of 55.6 for the month (a score over 50 indicates billings growth), as an even larger share of firms reported an increase in their billings than in February. In addition, inquiries into new work and the value of new design contracts both continued to rise, as an increasing number of clients are not only shopping projects around, but also signing contracts to begin new work. Backlogs at firms also rose dramatically from the fourth quarter of 2020 to the first quarter of 2021, growing by nearly an entire month from 5.3 to 6.1 months. This is nearly back to the pre-pandemic peak of 6.5 months and means that firms have a solid supply of work in the pipeline if the economy falters in the coming months.

Architecture firms in all regions of the country also reported improving business conditions in March, even those in the Northeast, which had seen weaker conditions even prior to the pandemic. Billings were strongest at firms located in the Midwest and South, with those in the Midwest reporting particularly strong growth following a soft winter, partially due to harsh weather conditions. In addition, firms of all specializations reported billings growth this month, with the highest rate of growth reported by firms with commercial/industrial and institutional specializations, the two sectors hardest hit by the pandemic. Some firms are even reporting that their leisure and hospitality projects are starting to come back to life, as more people are vaccinated and start going out and traveling again.

March was also a strong month in the broader economy, with nonfarm payroll employment adding 916,000 new positions, largely in the leisure and hospitality, education, and construction sectors. Notably, the construction sector added 110,000 new jobs, following a loss of 56,000 in February that was likely due to the severe winter weather. Architectural services employment data lags by a month, but the most recent available data tells us that 1,100 new jobs were added in February, rising to a total of 191,400 employees in the sector. While this is still 7,800 positions below the pre-pandemic peak one year ago, more than half of the 16,000 jobs that were lost in 2020 have since been added back.

And in the latest edition of the Federal Reserve’s Beige Book report, released on April 14, the overall national sentiment was broadly positive, as economic activity generally accelerated at a modest pace from late February through early April. The outlook was also more optimistic overall, largely due to the rapid increase in vaccinations. Tourism was one area of notable improvement, likely due to spring break, with increased demand for leisure activities and travel. In most areas of the country demand remained high and prices continued to increase for single-family homes, notably in the Atlanta, Dallas, and San Francisco Districts. Commercial real estate and construction activity was more mixed, with many districts reporting that the hotel, office, and retail sectors remain weak, although stronger construction growth was reported in the Minneapolis District.

This month’s special practice questions asked firms about how head count at their firm has changed over the last year due to the pandemic. Responding firms reported an average decline of 1.7% in total staff head count at their firm from January 2020 to today. Nearly half of responding firms (48%) indicated that their head count was about the same as last year, while 31% reported that it declined, and 21% reported that it increased. A larger share of firms in the Northeast (41%) and with a commercial/industrial specialization (39%) reported a decline, as this was the region and sector hardest hit by the pandemic. On the other hand, more firms in the West (25%) and with a multifamily residential specialization (30%) saw an overall increase in staff in the last year. 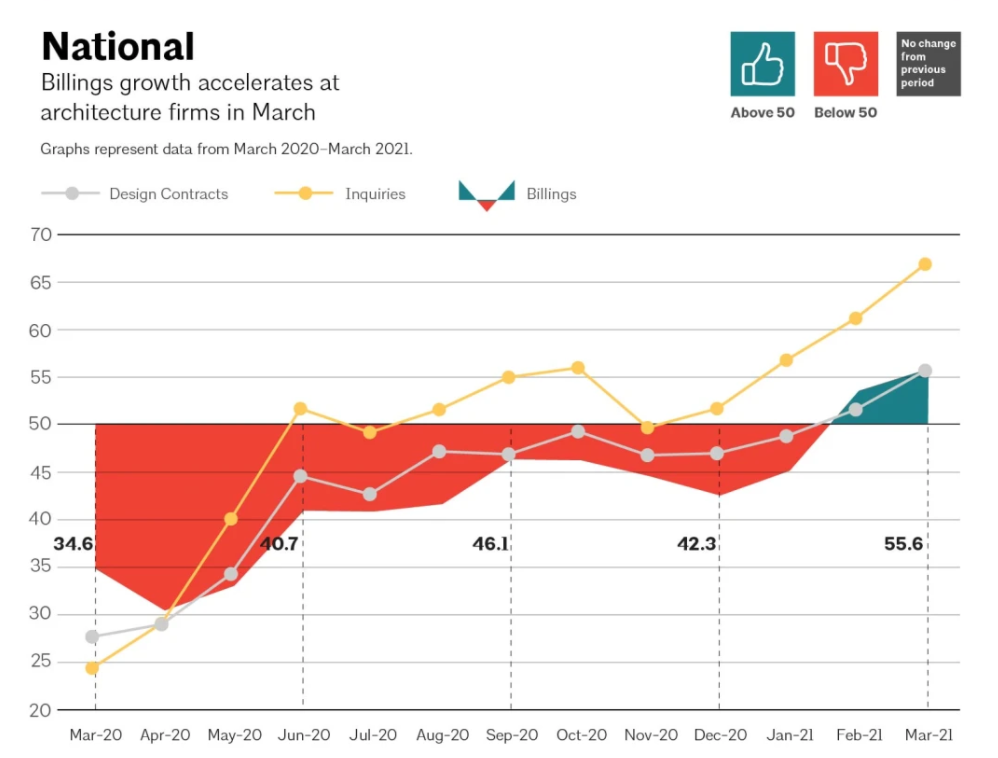 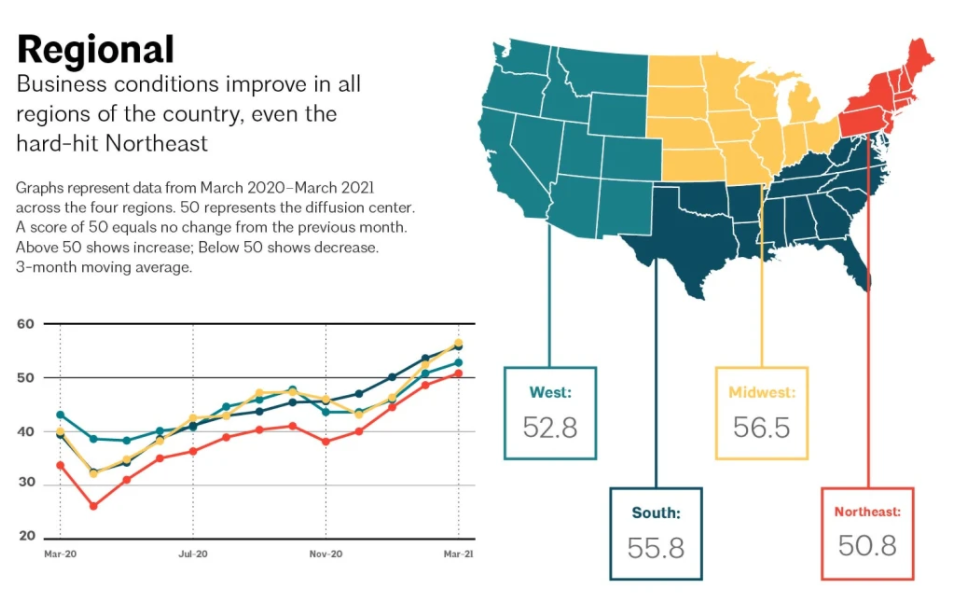 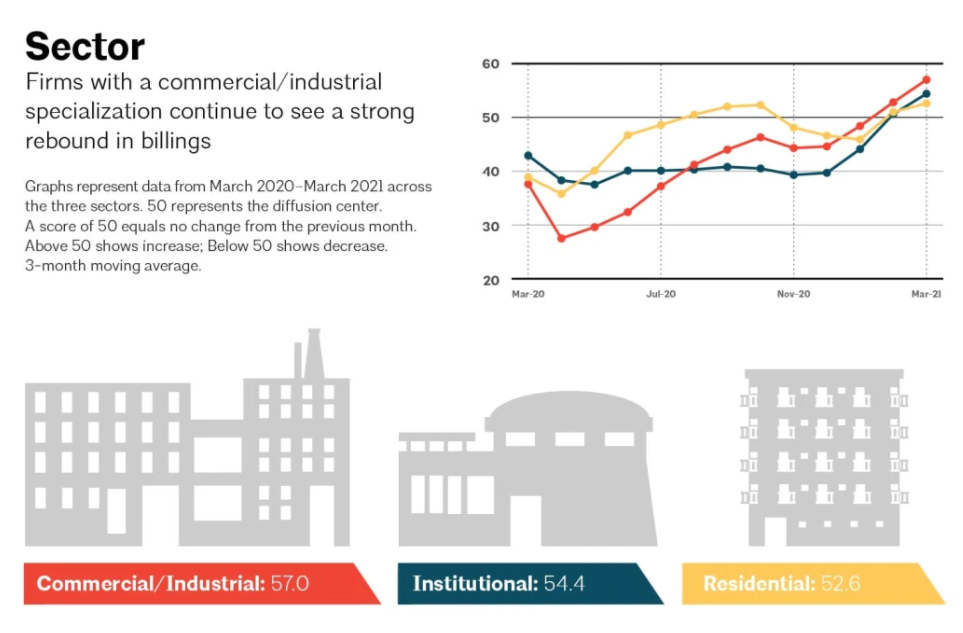 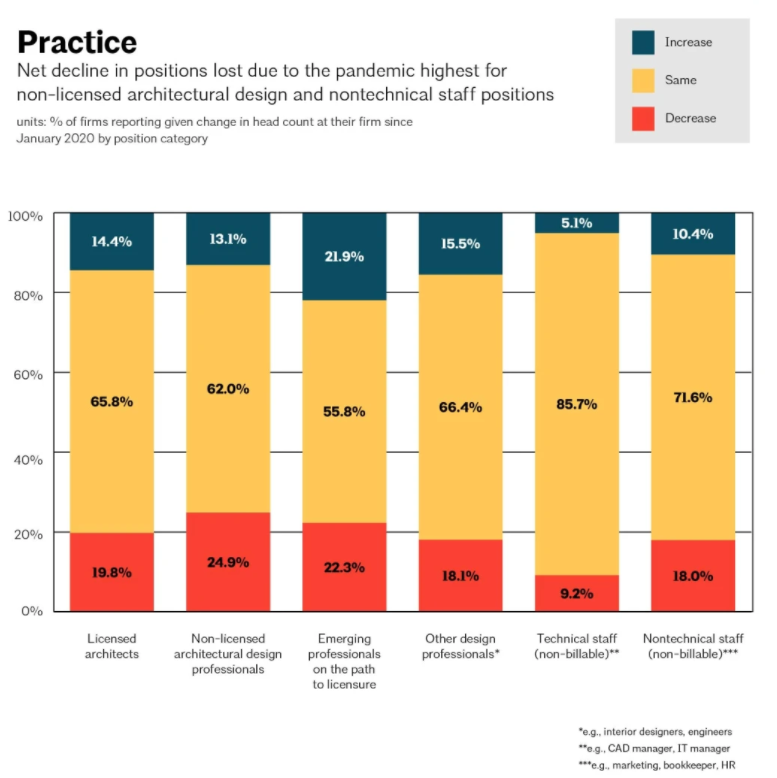 Many firms are finding that fewer proposals are converting to active projects since pandemic’s start Business conditions remained stalled at architecture firms in August, with…